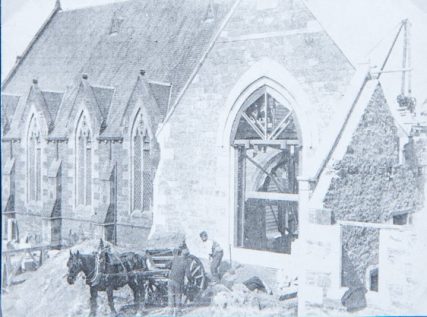 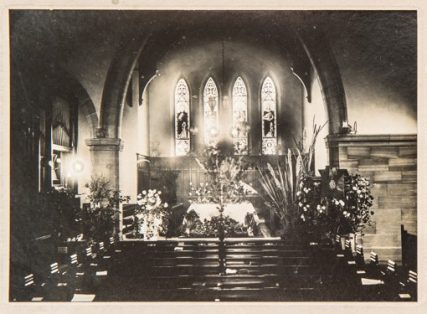 As Newport grew through the nineteenth century, the parish church of Forgan could not meet the needs of the rapidly increasing population, and so it was decided that a new Establishment church was needed in the village. An energetic fund-raising campaign was launched in 1868. The all-male committee very quickly realised the advisability of also appointing a ‘Committee of Ladies’, who speedily raised more than twice as much money as the men in that first year. Work started at the beginning of 1870. By the end of the year it was complete, and the new church opened on Sunday 6th November 1870. The church was named St. Thomas’ as a reminder of the Chapel of St. Thomas of Seamylnes, which in earlier times had stood near the shore.

In October 1901, the church embarked on another energetic fund-raising campaign. A Grand Bazaar was held in the Kinnaird Hall in Dundee, in order to raise money to extend the church, install an organ and build a manse. The bazaar lasted four days and raised £2,400, an impressive sum indeed in 1901. The manse was built the following year next to the church. Substantial alterations were also made to the church. A new chancel and transepts were added at the south end of the building, adding hugely to the church capacity. In addition an organ was installed. Thanks to the perseverance of the organist at that time, William Pae, a magnificent ‘Father’ Willis organ was installed for the princely sum of £661.  Refurbishment work on this organ in 2016 should ensure its lifespan for another hundred years.

St Thomas’ also lacked hall accommodation.  Just across Cupar Road from the church was the Unionist Hall, upstairs from the Cupar Road shops. In the 1920s St Thomas’ Church acquired this block, gaining the much needed hall accommodation and also the four shops below which over the years have accommodated a variety of businesses. Most recently two of the shops have been converted into Manna coffee shop. The upstairs hall became known as Kirk House, and was used until construction of the purpose-built hall behind the manse in 1992.

When the church was built funds were raised for the clock in the wider village, not just from potential church members. It was very much seen as a village clock, not just a church clock. The bell for the church clock was donated by Sir John Leng of Kinbrae, actually a member of the Congregational Church, and gas for lighting of the clock was donated by the local gasworks. In the early days the church officer had to climb the tower twice a day to light and extinguish it. For this extra work he was paid just £2 per year.

In 1978 St. Thomas’ joined with St. Fillan’s Church, and with Forgan Church in 1981. It is now Newport-on-Tay Church of Scotland.

For other images linked to St Thomas’s Church please search our archive.