Only two people were ever given the freedom of the burgh and made Honorary Burgesses. The first was Frank Morrison (of 1 Norwood) in 1953, after holding the post of town clerk for 37 years. In the royal silver jubilee year of 1935, when he had been in the post for 19 years, Frank received a presentation from Buckingham Palace of a Jubilee medal. 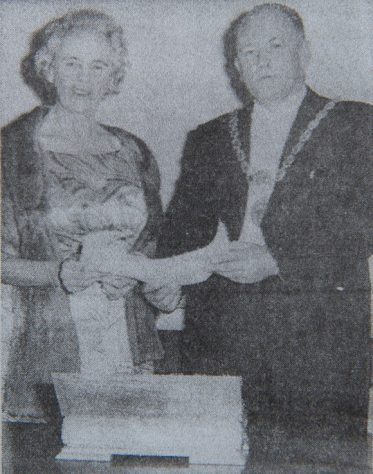 In 1970 Miss Maude Pilkington was granted the freedom of the burgh in recognition of her wide-ranging service to the community. This included work for the Red Cross, relief of multiple sclerosis, the Girl Guides and St Mary’s Church. She was a Justice of the Peace for many years and was awarded an MBE in 1961 for her involvement with social work. Miss Pilkington lived latterly at Whincrag, Norwood, but from the early 1900s until the early 1940s the Pilkington family had lived in St Fort house. 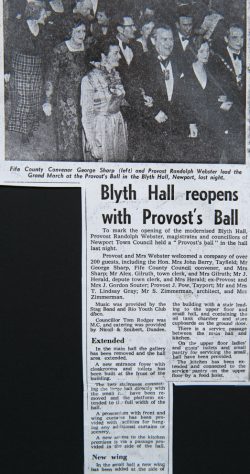 Under the care of the town council, the Blyth Hall twice underwent extensive refurbishment, once in the 1930s which included re-flooring with Canadian maple wood, and again in the 1970s. In 1973 and 1974 the hall was closed for a year while the gallery was removed inside the hall, a side extension provided better access to the rear and to the upper hall, and new toilets and cloakrooms were added to the front. To celebrate the reopening of the hall a grand Provost’s Ball was held, when Provost Randolph Webster led the celebrations.

The town council organised dozens of official dinners, celebrating all manner of events. Here we have a photograph of a dinner in the upstairs small hall. This was a complimentary dinner to ex-Provost J T Young (standing 3rd left) from Provost Scrymgeour (centre), Magistrates, Councillors, officials and wives 5th December 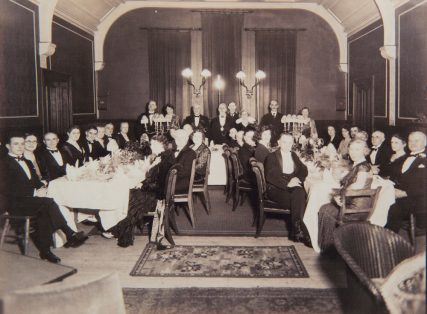 1934. Those who know the small hall well will assume it is taken towards the east window, towards the church. In fact it’s the opposite way round. Before the 1970s refurbishment, both ends of the small hall were identical, with large windows and no doors. Access to the small hall at that time was via stairs from the stage area below and in through the door (now a cupboard) on the right. The wall facing us would eventually have the windows removed and doorways added to allow access to the new passageway in the extension to the side of the hall. 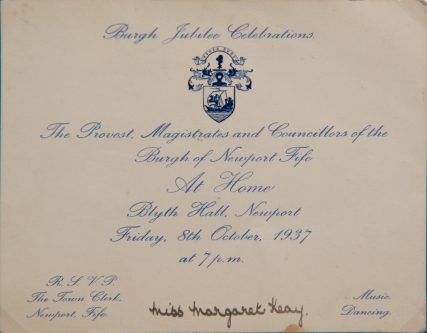 1937 saw the Golden Jubilee of Newport as a burgh. This coincided with the coronation year of George VI. In addition to all the events celebrating the coronation, the council also organised their own celebrations including this At Home event in the Blyth Hall.