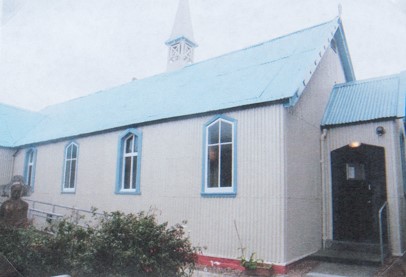 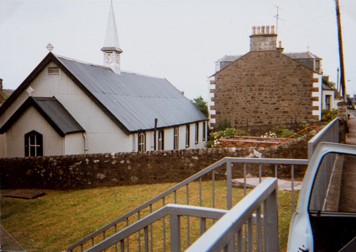 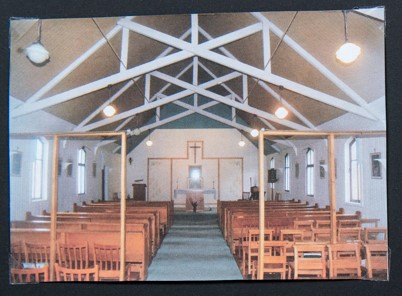 The Catholic Church was established in Newport in 1886, when a mission was founded here. In 1889 Newport was raised to the position of a distinct charge under the care of Father James Harris. A residence for the priest was purchased and, until a church could be built, Mass was said in a rented portion of what was the Royal Hotel on Robert Street/Tay Street corner.

The new church between King Street and Queen Street was opened on 25th January 1893 by the Bishop of Dunkeld, James Smith. It is a fine example of a so-called “tin tabernacle”, and is one of the few surviving buildings of such construction still used for its original purpose.

The 1925 Dundee and District Catholic Yearbook described the church as follows:-

“It stands a considerable distance from the street line, and is a neat but unpretentious little structure of corrugated iron. Inside it is lined throughout with white pine, and the timber roof breaks with good effect the harshness of the outline. Light is given by six windows on either side, and in addition there is a small but artistic stained glass window above the sanctuary. The sanctuary is divided from the body of the church by a pretty bentwood railing. The altar, in accordance with the church itself, is small but tastefully designed. The seats are substantially made, and can accommodate 250 worshippers.”

According to the Yearbook:-

“The church was erected mainly for the sake of the Mars boys, of whom double as many as before can now hear Mass every Sunday, while ample accommodation is left for the local congregation.”

Read Historic Scotland‘s background to the building of the church.