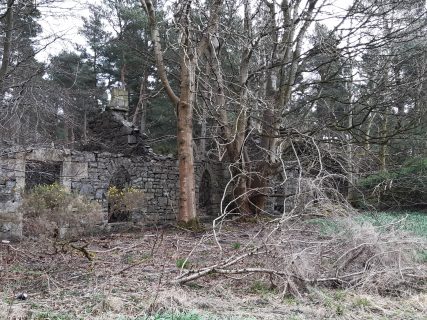 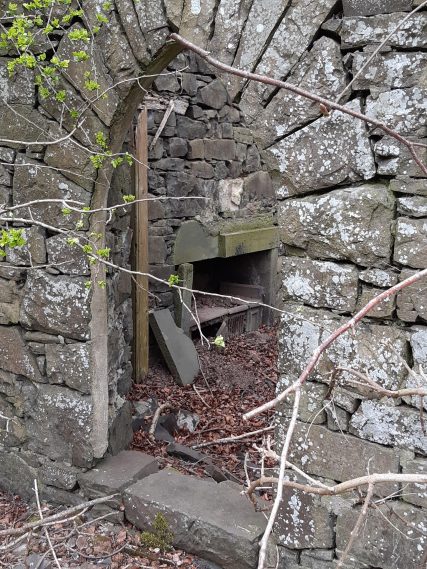 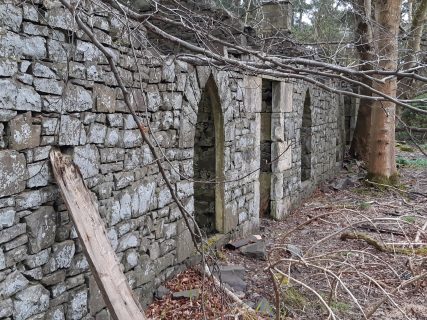 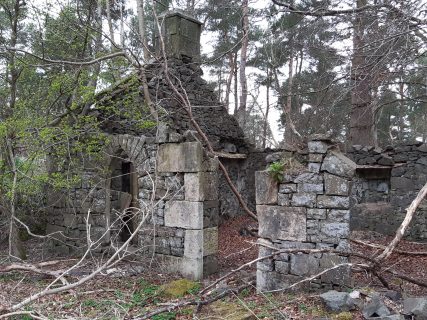 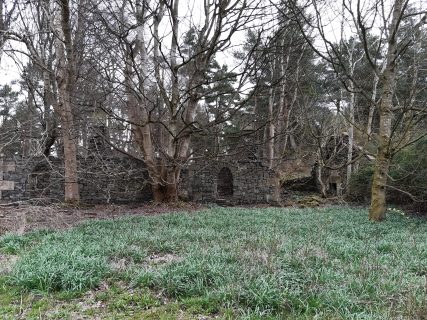 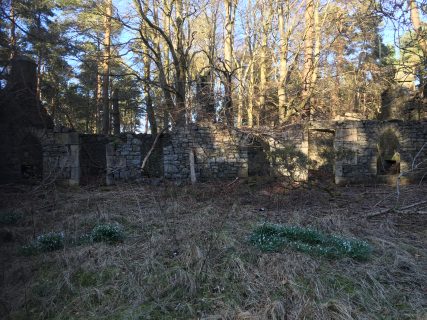 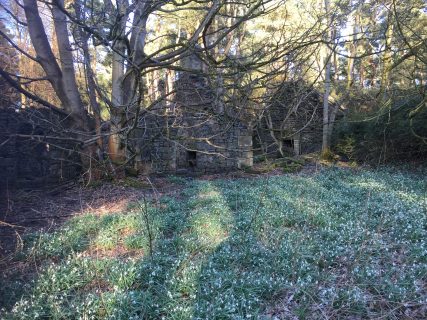 In the lockdown spring of 2020, many people were walking further than they usually did, discovering places they didn’t know before. Here in Newport and Wormit one of the places discovered by many for the first time were the ruined cottages in the woods behind Causewayhead Farm. These were the old farm cottages for Causewayhead.

Where to find them

Head up over the dual carriageway from Station Brae, through the gate and on up the track. At the top the track turns sharp right and takes you along to the buildings of Causewayhead Farm. Continue on the track round the farm buildings, then branch up to the left which will take you up into the woods. Take the track which heads to the right and a short way along you will see the cottages on your left. (Continuing on this track brings you out in the field above Washer Willy’s – see end.)

What can be seen?

The cottages are now in a complete state of disrepair and are therefore quite unstable and dangerous. Please don’t enter them as accidents could easily occur. They have most unusual and really quite elegant arched windows, very surprising in lowly farm cottages, and the fireplaces would be the only source of heating and means of cooking. They are easily viewed from the path, and perhaps the best time is February when you’ll see the carpet of snowdrops.

It is thought that the cottages were built in the 1840s by the Causewayhead Farm tenant to house his staff. According to the 1881 census there were four dwellings here, two of two rooms and two of one room. There were three families and one of the single roomed houses would be the ‘bothy’ for single farm labourers. Altogether a total of 12 people lived here. By 1901 however, even more shocking, four families totalling 26 people were living here in what was then described as four two-roomed houses. In one of these houses ten people lived, a couple and their 8 children, aged from 14 down to a baby, and including 10-year-old twins. Interestingly every one of the children, apart from the twins of course, had a different place of birth. This reflects the terrible insecurity of farm-work at that time. Father, a milkman on the farm, would have no job security whatsoever, and would be taken on by a farmer for just a season at a time as the need arose. Small wonder that many would leave the land for a more secure future in the industrial towns.

By the 1930s conditions in the cottages were becoming rather difficult, and John Berry decided to have three new farm cottages built. These are the cream coloured cottages to the west of the farm house. The tenants in the old cottages were re-housed to the new, and with their three rooms, kitchens and bathrooms, their new homes must have seemed palatial. The old cottages were then closed.

Apparently however, the cottages were still occupied after World War II, in the 1940s and 1950s, by occupants who had no leases or formal agreements. With the severe housing shortage after World War II, they were no doubt willing to accept the conditions there. People still remember smoke from the chimneys and the occupants working in their gardens. From about 1960 the cottages were empty, and they gradually became ruinous. Today, it’s an utterly peaceful spot, and difficult to imagine the noise and activity of the place more than a century ago.

After leaving the Causewayhead cottages, you can continue on the track through the wood, turn left along the edge of the field, and make your way down to the road coming out at Chesterhill Lodge. A short way down the road to the left is Washer Willy’s on the right hand side.

Thanks to Catherine Johnston and Stewart McKiddie for photographs.