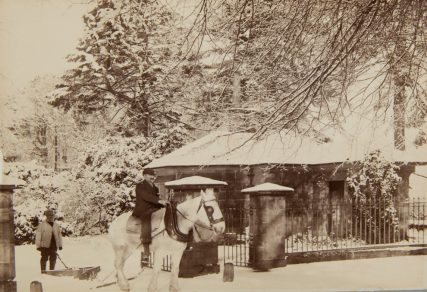 During the time of the first John Berry and the first William Berry the grounds of Tayfield were landscaped, the north and south drives were laid out, and the lodges built – the north lodge at the High Road entrance in 1821 and the south lodge in 1830. It is difficult to imagine that when Tayfield Estate was first established there were very few trees there. The first John Berry started a careful tree-planting programme. This programme is a continual process with trees regularly being replaced, and since John Berry’s day, it has been continued by succeeding 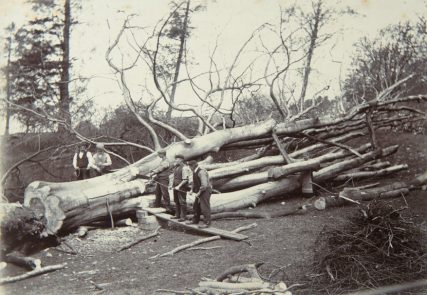 generations until the present day. The trees are certainly impressive. Some of them have been recorded as the tallest of their kind in Fife, and one beech tree the tallest in Scotland (recorded by the Tree Register of the British Isles).

Several features in the grounds are worth mentioning.

Close to the house to the north-west are the remains of the ice-house. Prior to the invention of the refrigerator, such structures were used to store ice throughout the year. Like many others, the Tayfield ice-house was basically an underground chamber with a stepped entrance. In winter ice would be collected from the nearby mill ponds and packed into the ice-house where it would remain frozen for many months. 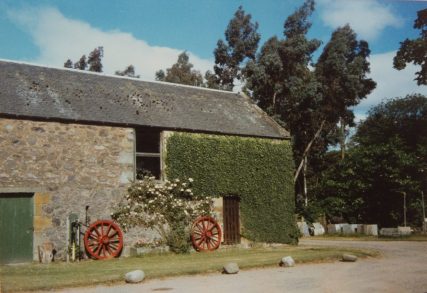 To the south-west of the main house lie the buildings of the home farm. These incorporated a house and bothy for the estate workers. The buildings on the south side of the courtyard were later converted to the Garden House, looking out over the walled garden. The walled garden is an acre in extent. At one time there was a whale jaw bone over the east entrance to the garden until it eventually collapsed. 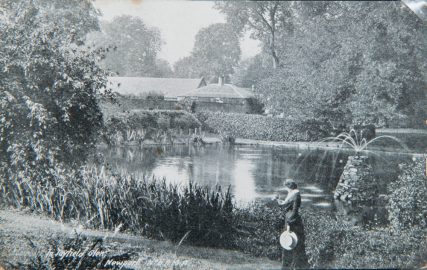 One of the pleasures of the Tayfield grounds is the variety of birds to be seen, especially around the ponds. The original Upper and Lower Mill Dam Ponds were dammed to provide power via a wooden water wheel for the original Seamills and later for the smiddy machinery. The Duck Pond south of Tayfield House was excavated by spade and barrow at the end of the nineteenth century for the then William Berry’s collection of water fowl. Over to the west of the grounds are the old Curling Ponds, one still with water in it. These were used by the local Curling Club. 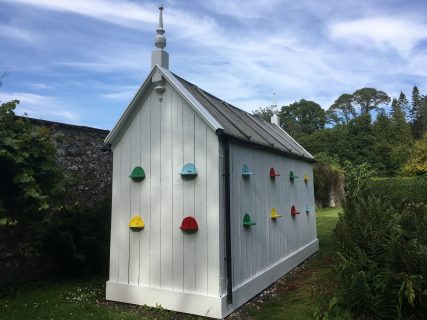 Outside the rear wall of the walled garden is a most unusual and colourful structure. This is a Victorian bee house, one of only five known in Scotland, and probably the only wooden one. It has now been listed as a building of historical importance. It is believed to have been brought to Tayfield by boat around 1850. The actual hives were on shelves inside, with a different coloured entrance for each hive. Did the bees recognise the colours, or did they home in instinctively on their own hive? The hives could be worked from inside the bee house, and each hive had a glass observation window on its rear wall. It was probably last used in the 1950s. 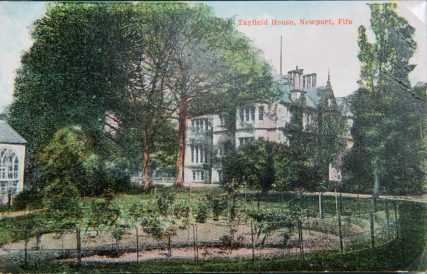 The Rose Garden with Summer House off to the Left

To the west of the house is what in earlier times must have been a rather grand summer-house. This dates at least from the 1840s, possibly many years earlier, and is an excellent example of early recycling! When the new Forgan church was opened in 1841 parts of the old kirk building on the back road to Tayport were removed. Some of the windows were put to good use as part of the Tayfield summer-house. In front of the summer-house was a circular rose garden.

To the rear of the summerhouse is the former dairy. William Berry recently commissioned the restoration of the dairy, and recalls the years when this little building was used by his great aunt to make cream and butter from the milk of the house cow. 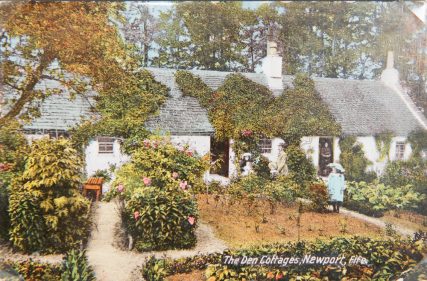 In the extreme west of the Tayfield grounds, on the edge of the wooded area towards Kirk Road, are the ruins of the Den cottages. These cottages were in the most idyllic setting, and were the subject of many picture postcards. They are still fondly remembered by those who lived there, and were particularly noted for the attractive and productive gardens. At the start of the last century, they were used by the then Mrs Berry for charitable purposes, as they were offered as holiday homes for workers and invalids from Dundee, and as a place of rest and relaxation for London city missionaries. They were occupied until the 1950s but sadly they are now derelict.

For much of the 19th and at the beginning of the 20th centuries, tickets were issued  giving permission to walk in Tayfield grounds. The one shown here is giving permission to Mr William Blyth Martin not just to walk, but also to fish in the March pond. This was another name for Jess Philip’s dam, near Washer Willy’s.

Thanks to the Berry family for many of the images on this page and in our archive too, and also for providing much information.