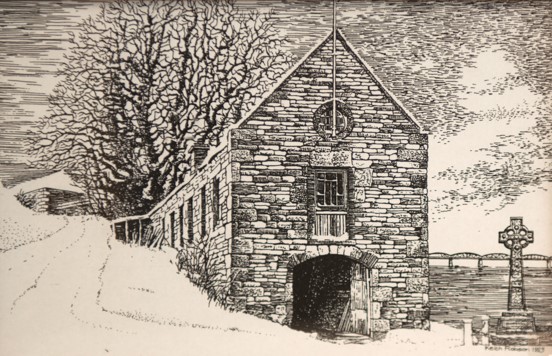 There have been many joiners offering their skills in Newport and Wormit, some for considerable periods of time, but for their sheer longevity, two families are worth looking at. They are the Lattos and Rankines.

Arthur Latto of Balmerino settled in Newport around 1840, and in the late 1850s his son David became the first Latto joiner in the village. From the late 1860s David lived at Carseview (now 20 Tay Street) and in these early days had premises in the High Street. Among other work undertaken at this busy time in Newport’s development, David assisted in the erection of Westwood, now St Serf’s care home. By the 1880s his premises were in Union Street and he had extended his services to glazier and undertaker. David had two sons, James and John, who followed him into the business. James had no children, but John’s son Herbert followed in his father’s and grandfather’s footsteps, and he in turn was followed by his son Michael.  Although they no longer occupy the Union Street premises,  Michael, now retired, has been proud to be the fourth generation of Latto joiners in the village, and the name is still well known.

Another long-established joinery business was Rankine’s at Woodhaven. This firm was founded in 1875 by William Buist in the building above Woodhaven pier. He lived with his family in the cottage up above on the main road. The cottage is no longer there and a house has been built on the site. The building trade was brisk in this area when William started out, and his men were fully employed both in the workshop and out on site benefiting from the boom in house building in the last years of the nineteenth century.

His grandson Willie Rankine joined the business in 1903 aged 13, eventually taking it over on his return from the Great War in 1919. His grandfather had given up two years earlier, aged 81! Like his grandfather, Willie worked on until well into his eighties, but passed the business on to his son Sandy in 1965. The sharp bend in the road at Woodhaven was always known as Rankine’s corner. Sandy Rankine lived in the cottage there, without electricity, until the 1990s.

Like many other joiners, Sandy also served as the local undertaker. His workshop frequently doubled as the morgue, as bodies awaited their final fitting in beautiful hand made coffins. For that reason, local children steered a wide berth round the workshop.

The joinery workshop was the former pack-house for the Woodhaven ferry, where taxes and dues were paid for goods arriving or departing by boat. During World War II the workshop was taken over by the Norwegians based at Woodhaven Pier and Willie Rankine became a close friend of the Norwegians, maintaining strong links for years after the war, links which are still maintained today. In 2020 the building has been operating for some years as a B and B.

We are of course very fortunate to have other very skilled and obliging joiners in Newport today, but they have to be around for 100 years before getting a mention on this website!