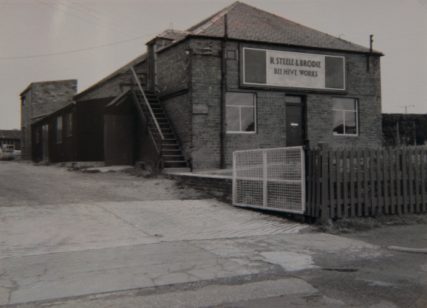 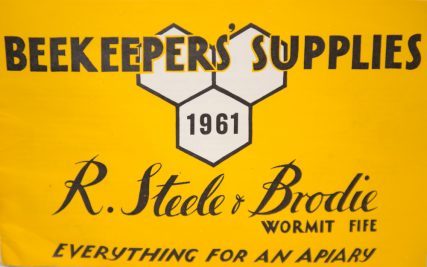 Steele and Brodie were for most of the twentieth century the only bee equipment manufacturers in Scotland. Robert Steel started his beehive manufacturing in the 1870s in Dundee, and very soon moved to premises in Gauldry. A fire in 1899 forced another move, this time to Kilmany Road, Wormit. Very briefly in 1900 the firm was listed as Steel and Raitt, but thereafter only Robert Steel. By 1910 the more familiar Steele (with an e) and Brodie partnership had evolved, and this partnership soon became a familiar and well respected name among beekeepers. After the First World War the company expanded into general joinery work and production of poultry houses, but soon the demand for bee equipment led to their concentration on that. They remained in business as bee equipment manufacturers and suppliers until closure in 1998. Four houses now occupy the site of the beehive works, and the name of the houses, the Beehives, along with a decorative panel built into the entrance wall, are now the only reminders of this once thriving business.

Read the history of Steele and Brodie.

Search our archive for more Steele and Brodie images.