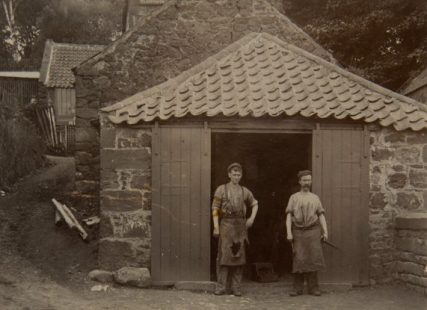 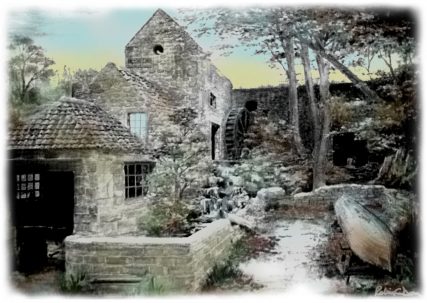 In Newport the name John Don is immediately associated with blacksmiths. The Don family came to Newport in the 1870s. Father James was a gardener, and two of his sons, John J and James jun., became blacksmiths. The family lived in the block of flats which eventually became the site of the Rio Cinema. In the 1880s John J Don’s first job was as a rivet boy on the construction of the railway bridge, after which he spent some time making golf clubs in St Andrews.

By the mid-1890s he had established blacksmith premises on Victoria Street, roughly where the surgery is. Much of his work in these early years was sharpening the stonemasons’ tools. The house-building boom in Newport and Wormit at the end of the nineteenth century meant the masons’ skills were in great demand, and their tools usually had to be sharpened by night, ready for the next day. John J would work long into the night, working by candle light and the light from the smiddy fire.

Move to the Pier Smiddy

In 1909 he moved his business to the Seamills smiddy opposite the pier, which had previously been tenanted by Willie Young, father of John T Young who would eventually develop his garage business on Boat Road. John J Don was joined by his son John B in the 1920s. When the pierhead smiddy closed in the 1940s the business moved to premises near the old pier.

Soon after this move, grandson John S Don joined the business in the late 1940s and a further move took them to premises in King Street. Finally in the 1980s the business moved to their present location in Naughton Road, Wormit, originally the site of Collie’s garage from the early 1900s until the mid-1960s. John S Don’s son Brian and grandson Mark continue the business with John S still taking a close interest in it. In total there have been five generations of Don blacksmiths in the village.

Until the 1880s there was also the Tayfield Smiddy which stood at the junction of Victoria Street and Cupar Road, where Darvel Lodge now stands. The last blacksmiths at the Tayfield smiddy before it closed were William Lowden and his son William.

Just outside the village, on the St Andrews road, was the Forgan smiddy. Originally the smiddy for the St Fort estate it sometimes bore that name. From the 1840s until the 1870s the smiddy was worked by father and son David and John Murdoch, and then until 1926 by Thomas Fearn. In 1926 it was taken over by Kenneth Cunningham who was joined in the 1940s by his son Ken.  Ken later developed the business into a successful motor engineering operation.