You are here: HomenextLeisurenextGolf in Newport and Wormit

Golf in Newport and Wormit 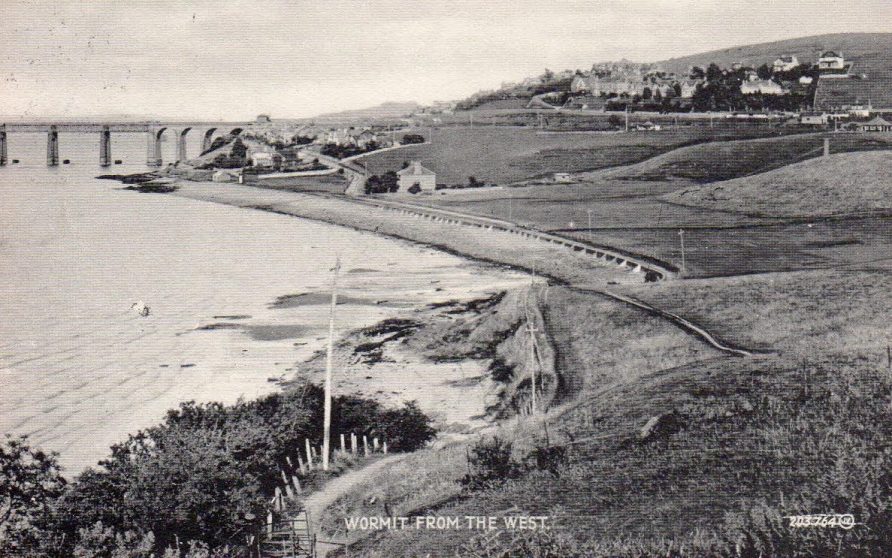 Wormit Bay Golf Club was in existence from 1912 until 1940. Before the course opened, much work was required on the land, and boys from the Mars training ship were asked to help clear the long weeds and stones. Although the Mars boys no doubt enjoyed this change of routine, and of course worked for no payment, as a thank-you gesture the golf club made a donation of five pounds to the Mars Boys Amusement Fund.

The nine-hole course had a lovely shore-side position down at Wormit Bay. In its ‘Information for Members’ booklet, it claimed to be the nearest golf course to Dundee city centre. From there, via the 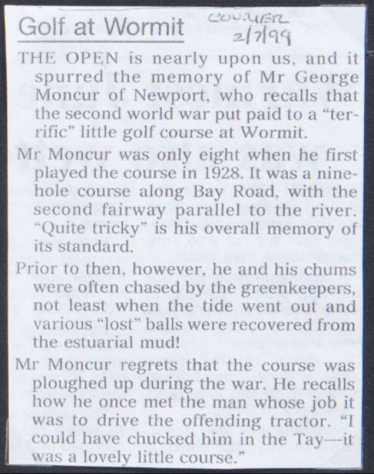 train, one could be on the first tee within fifteen minutes. By the mid-1920s membership had reached 200. A clubhouse was erected in 1914. From the outset it was hoped that the nine holes could be extended to eighteen, and plans were drawn up accordingly, but this was never achieved.

During World War II when food supply lines from abroad were coming under daily attack the Government launched their Dig for Victory campaign which encouraged more home food production. As part of this campaign, many areas of land such as putting greens, bowling greens and golf courses were ploughed up, and Wormit Golf Course was one of the casualties. Sadly, after the war the golf course was never reinstated. 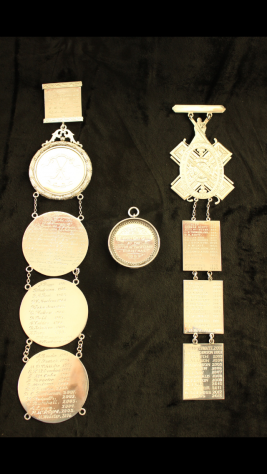 Much to most people’s surprise, Newport did at one time have a golf course.  In the 1880s there was a course laid out on land near Inverdovat farm. Unfortunately the course consisted of only six holes. For the annual competitions, therefore,  three rounds had to be played. The club played for three medals: the Newport medal, provided by the club; the Walker medal, presented by honorary captain Harry Walker (of Westwood, now St Serf’s home) in 1888; and the Wizard medal, presented by the editor of the Wizard of the North in 1889.

An 1890 issue of the Golfers’ Annual magazine included a feature on the Newport Golf Club, and was less than complimentary about the quality of the course and the players. According to the article “the course is more famous for its magnificent view of mountain, sea and meadow than for the fine quality of its putting greens. The grass is long, the holes few in number and many are the strokes required to find them.” It also suggested that if the view was not quite so beautiful the standard of play might improve.  To improve the course the magazine suggested “the transportation of a few sand hillocks from Tentsmuir, and a bunker or two from St Andrews”.

The End of Golf in Newport

From the 1890s onwards members no longer had the use of the land, and so in 1891 the Newport Club joined with Scotscraig Golf Club at Tayport. Since then the Newport medals have been contested by Scotscraig Golf Club members. After closure of the Inverdovat course hopes of a Newport Golf Club were not quite extinguished: in the Newport guide of 1924, strong suggestion was made of a course to be laid out on St Fort Estate. This plan surfaced again in 1938 when there is a reference in the burgh minutes to a possible course to the south of West Newport station. The approach of war no doubt gave the council more serious matters to address and the golf course plans came to nothing.

Gone too is the putting green which between the two world wars occupied the ground beside Station Road and below Albert Crescent. Like Wormit Bay Golf Course, the putting green became a casualty to the government’s Dig for Victory campaign during World War Two, when all available land was taken over for food production. The village has not had a green since then. 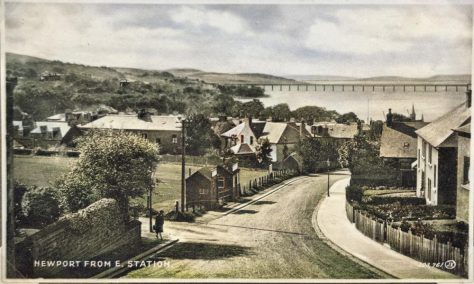