You are here: HomenextLeisurenextAnnandale Bridge Club 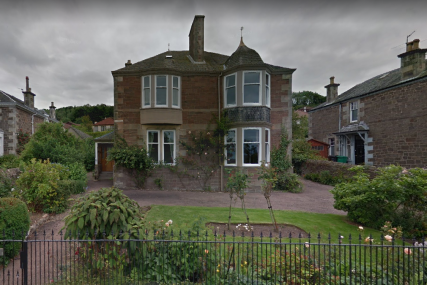 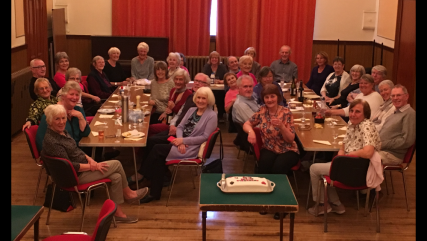 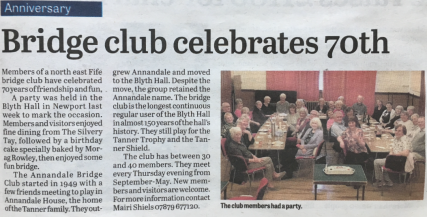 Much to everyone’s surprise the Annandale Bridge Club is not based in Dumfries and Galloway, but instead here in Newport. This club with the surprising name was started in 1949 in the house called Annandale, on St Fort Road. This was the home of the Tanner family, parents and son who were all keen bridge players. Word soon spread and numbers swelled, with bridge tables filling the two downstairs rooms and the hall as well. Within a few months it became clear that a new home was needed.

In 1950 they moved to the small Blyth Hall, where, despite the move, they retained the Annandale name. Apart from during hall alterations in 1974, they have played there ever since. Occasionally the club held special functions in the Seymour Hotel, and ex-member Jack Morton remembered some members bringing along lumps of coal to add to the fire in the rather chilly room that they used. The bridge club is the longest continuous regular user of the Blyth Hall in almost 150 years of the hall history.

In 2019 the club celebrated its 70th birthday with a party in the Blyth Hall. The club still has in 2020 around 40 members and meets weekly. It is affiliated to the Scottish Bridge Union and has close links to other bridge clubs in the area. Although of course the members are fiercely competitive, the Annandale has a reputation for being a particularly friendly club. As a reminder of the club origins, members compete annually for the Tanner Trophy and the Tanner Shield.