You are here: HomenextLeisurenextMaharajah Visits Woodhaven 1933

Notice in the Dundee Courier and Advertiser 27th May 1933

Woodhaven will have an important visitor today. The Maharajah of Kallimpoor has been recruited to open the May Fair which the 16th Dundee (Newport) Group of Boy Scouts have organised on behalf of their new headquarters, the Mars sheds at Woodhaven pier.

Procession from Wormit Station at 2.15 p.m.

Opening ceremony  by The Maharajah  of Kallimpoor at the Mars sheds, Woodhaven

By our Lady Correspondent of the Courier and Advertiser:

In their ignorance a few misguided citizens referred to the distinguished visitor as the monarch of “Call Him Poor,” but this faux pas was hastily corrected, and the Maharajah graciously accepted the homage offered him. He had (or so it was alleged) flown by special plane all the way from his Indian domain to perform the opening ceremony at the Grand May Fair, organised by the 16th Dundee (Newport) Group of Boy Scouts. As his mode of transport was somewhat expensive, he was able to bring with him only his four favourite wives. The Maharajah and his suite travelled on the 2.15 pm train from Dundee, and on arrival at Wormit station they were received by Baillie Tudhope. 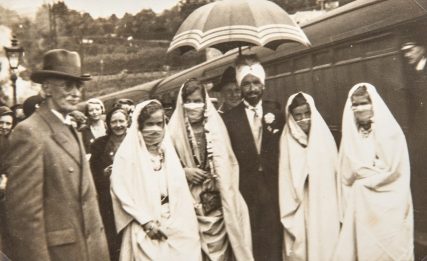 The Royal Party Arrive at Wormit

Introductions were effected by Scoutmaster Tom Walker, and among those presented to His Highness were Cub Mistress Stella Watt, Assistant Cub Mistresses Margaret Ireland and Lorna Lees, and Cub Master D. McPherson. 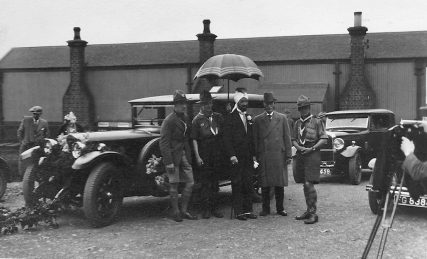 Before entering the Royal car, which was decorated with lilac and broom, the Maharajah inspected the guard of honour of Cubs and Scouts, smilingly faced the usual battery of cameras, and acknow­ledged the ovation accorded to him by the huge crowd lining the station railings. 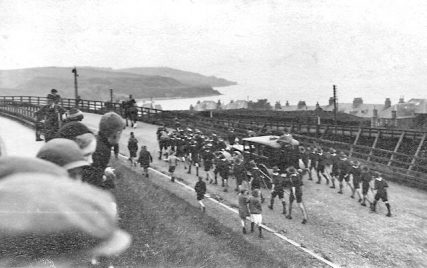 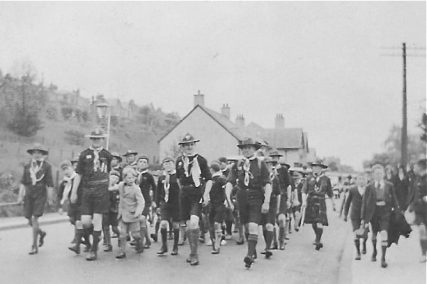 Preceded by a cowboy outrider (Mr Harry Robbie), the procession moved off in state, the Maharajah’s car being hauled along to Woodhaven by a company of Cubs. All along the route, enthusiastic cheers were raised as the Royal car slowly made its way to Woodhaven, where a huge banner flapped lazily in welcome, and an ice cream barrow and its attendant lent local colour to the scene. 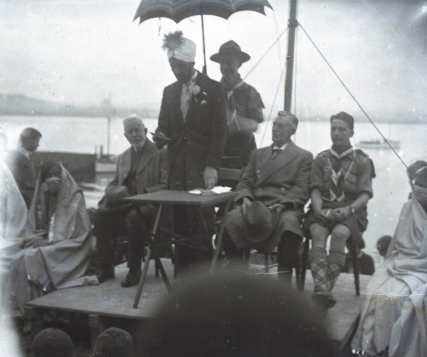 Mr J. C. Low then formally thanked the Maharajah for his gracious presence, and complimented him on the fact that he not only seemed to possess a truly remark­able grasp of the English language, but also of the Scottish tongue.

All the Fun of the Fair

Opening ceremony completed, the many helpers got to work. Inside the old Mars shed, now the headquarters of the Scout Group, sixpences and shillings were lured from unwary visitors at work stalls and candy stalls, while others emphasised the attractions of miniature golf, hoop-la, lucky dips, cover the threepenny, shove ha’penny, and miniature rifle range. 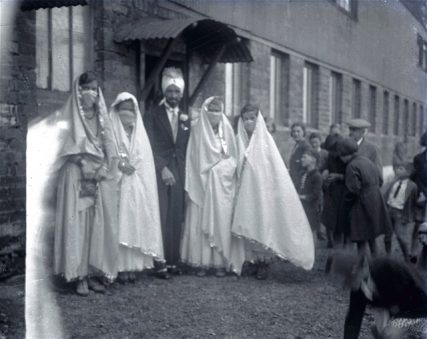 Maharajah and Wives Outside Mars Sheds

In the dim, delightful darkness of a cottage tent, maidens thrilled to the secrets of the palmist, confided at a bob a time. Farther along a lightning sketch artist created a veritable storm of talent, polishing off his sitters at the rate of 15 an hour, while another young man persuaded the local ladies to enter for the ankle competition, in which the contest was very keen.

In an outhouse a miniature railway pursued its perilous way, the young ‘directors’ showing remarkable insight into the running of a railroad, and a lamentable disregard of anything like an orderly time­table.

Brisk trade was done by the immaculate, white-clad yachtsmen, who were kept busy all afternoon and evening giving motor boat cruises, which gradually extended in dura­tion until they included river crossings. Needless to say, the refreshment booths were the most popular spots, and fresh sup­plies of ice cream, lemonade, and tea were constantly in demand.

Half-way through the proceedings I noticed that the Maharajah had mys­teriously disappeared, and a certain young gentleman, wearing on his black polo jersey the badge of the local yacht club, was followed around by several small Cubs, who insisted that but for the absence of a flowing beard and snowy turban he was the very image of the Maharajah.

The May Fair, which was in aid of the upkeep and repair fund of the Woodhaven headquarters, realised about £90.

Adapted from the photograph album of Lizzie Clark, Wormit 1933.

Note: Her son Jack Clark ‘starred’ as the Maharajah. Jack was later tragically killed during World War II. His ship was sunk by the Japanese  in 1942 while carrying refugees from Singapore to Perth, Australia.