You are here: HomenextTransportnextTay Road Bridge 1: Planning a Bridge 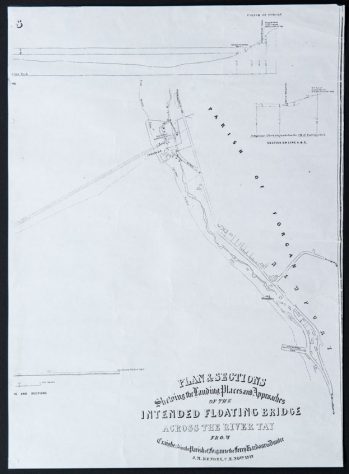 Amazingly, more than 120 years before the present road bridge was opened, plans had been drawn up for a bridge. In 1842 a floating bridge, or chain ferry, was planned, crossing from Craighead to Dundee harbour, almost the same line as the present day road bridge.

There was talk of a Tay Road Bridge for the better part of a century, but as long as railways carried most of the country’s goods and passengers the cost could not be justified. Only when the motor car began to put traffic back on to the road in the 1920s did the idea become acceptable. Plans for a bridge were actually drawn up, but even then the idea foundered: the Depression of the 1920s and 1930s left Dundee in no position to pursue such ambitious projects and plans were dropped.

There was more talk of a bridge in the 1940s, but more urgent post-war problems were requiring attention, and it was the 1950s before test borings were made which established that a bridge was possible. In August 1955 the Tay Road Bridge Joint Committee was formed with members from Dundee, Fife and Angus. William Fairhurst was chosen as project engineer, and by 1960 his plans had been accepted.

The Government however made it clear from the beginning that it would support the bridge only if all building and running costs were met by tolls. Reluctantly the Committee accepted this, and it was agreed that the three local authorities, Dundee, Fife and Angus, would each contribute to the building costs of the bridge, with the Government advancing the remainder. All money lent would be repaid in due course, if necessary over 60 years. Scottish Government legislation eventually scrapped the tolls in 2008.

The Committee, having set things in motion, became, with a few changes, the Tay Road Bridge Joint Board. It was this body which controlled the building of the bridge and which would also control the running of it. 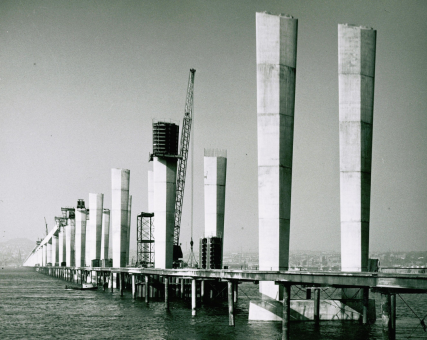 Fairhurst’s design was for a bridge of forty-two concrete and steel spans. Steel box girders would be supported on concrete columns. The double parabolic shape of the columns was unique and stylish, and meant that each column looked good regardless of height. As the bridge rose from a height of 20 feet at Dundee to 125 feet at the Fife landfall the gradient was a constant 1 in 81 for the whole length. The increased height at the Fife side meant that the shipping channel could be accommodated just where the water was deepest and the bridge was of a sufficient height. 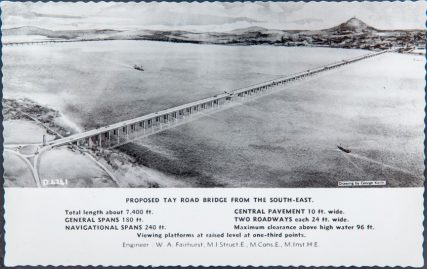