You are here: HomenextTransportnextTay Bridge Disaster 3: The Night of the Great Storm

Tay Bridge Disaster 3: The Night of the Great Storm 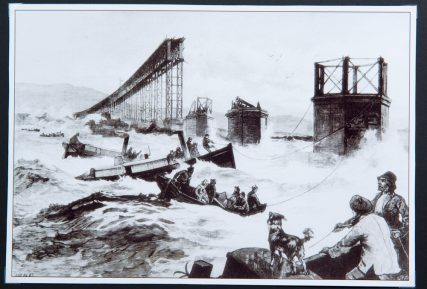 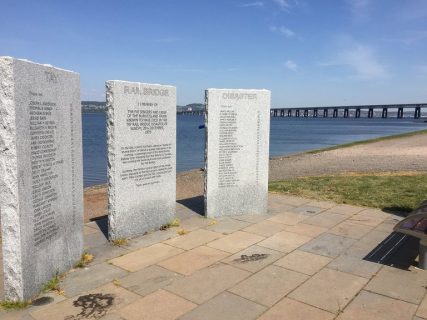 A violent storm struck Tayside and the rest of Scotland on the evening of 28th December 1879. According to reports at the time, the wind was quite awesome in its strength, shaking the lighthouse at Tayport, and destroying the magnificent glass roof of the new Tay Bridge Station in Dundee. Battling through that storm, towards the bridge, came the 5.20 train from Burntisland. At St Fort station, the last before the bridge, tickets were collected from the passengers, and then at 7.10 pm it passed the men in the Wormit signal box and trundled out on to the bridge.

The Bridge is Down

Because it was such a dark and cloudy night it appears that no-one actually saw the bridge fall. There were however eye-witnesses who spoke of seeing two or three distinct flashes at the time of the accident. When the clouds cleared, in the moonlight the damage was all too clear to see. The centre section of the bridge, the section known as the High Girders, had collapsed, and of the train there was no sign at all. The first tangible evidence that something was very amiss with the train, was North British railway mail bags washing up on the shore at Broughty Ferry. The train, with its five carriages and at least 59 passengers and crew, had  indeed plunged into the icy waters of the Tay.

Understandably, news of the disaster spread very quickly and, despite the storm, onlookers gathered on both sides of the river. Distraught relatives of possible passengers on the train converged at Tay Bridge station, desperate to know more. Due to the weather it would be some hours before any ship could get close to the scene of the disaster. Much later that night the ferry Dundee did manage to reach the scene. By the morning it was clear that there would be no survivors and the search for bodies could get underway. Over the years there has been much speculation about the number of casualties. The number of tickets collected in at St Fort Station gave a reasonable figure, but more recent research by Murray Nicoll of Dundee would suggest the figure of 59 known casualties. The memorials that were erected in 2013 on both sides of the river list the names of these 59 casualties.