You are here: HomenextTransportnextCoaching Days 1: the Roads 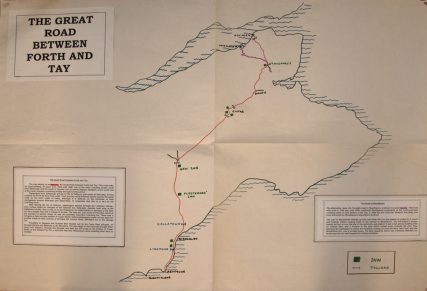 zoom
Map of Great Road between the Forth and the Tay 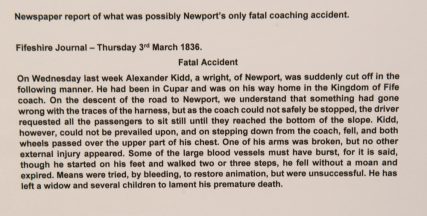 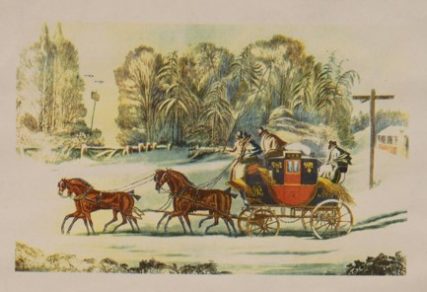 The Turnpike Road to Woodhaven

The Turnpike Road to Woodhaven was, from 1790 until 1808, the road to the most important crossing place on this stretch of the Tay. Passengers arrived at Pettycur, on the south coast of Fife, on the ferry from Leith and took the coach from there through Kinghorn and Cupar, and on to Woodhaven and the ferry to Dundee. However it was a difficult route for a coach and horses over Flass Hill, before coming down to the toll-bar at Woodhaven. Next door to the toll-keeper’s house was the Woodhaven Inn and the farm opposite had a brewery attached. In 1808 the new road to Newport was built and the importance of Woodhaven as a crossing point declined, although The Royal Fifeshire Union Coach was a new service set up in 1810 by Mr Nicol, vintner at Woodhaven.

The Great Road from the Forth to the Tay

For about 40 years, from 1808 to 1848, the Great Road between the Forth and the Tay was the main coaching route joining Edinburgh to Dundee. Coaches ran from Pettycur to Newport. Parcels and other luggage were also carried by this service. The route taken by the coaches is the same as many of the main roads today.

The coach left the inn at Pettycur, passed through the Linktown toll-bar and headed for the National Inn at Kirkcaldy, where the horses might be changed. It then went to the Gallatown toll-bar and on to the Plasterers’ Inn (Glenrothes) or the New Inn, south of Freuchie , for a longer stop and change of horses. This was an important Inn at the junction of several roads and had a toll-gate. The next toll-gate was at Cupar South, where passengers could break their journey again at various establishments, such as the Tontine Hotel, MacNab’s Inn or the George Inn.

Those passengers heading for Newport and Dundee left by Cupar East toll-gate, travelled through Dairsie and St Michael’s, and then on down to Newport through the toll-gate and past the toll-house at the bottom of Cupar Road. They could then wait at the Newport Inn for the ferry to Dundee.

During the Napoleonic Wars coaches driving through Fife would be decorated with greenery to signify a victory over the French, as they did not have time to stop everywhere and pass on the news.

The first (and possibly only) fatal coaching accident took place on 3 March 1836, leading to the death of Alexander Kidd, a wright.