You are here: HomenextWar!nextWorld War II: War Effort at Home

Everyone was involved in World War II, whether old or young, a civilian, or in the forces. For six years the war was fought on the home front. 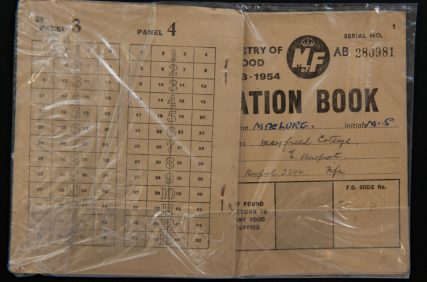 Food, clothes and petrol were all rationed. Housewives struggled to cope with food rationing. They registered with a local food shop and could only buy the rationed items in that shop.  Bacon, butter, sugar, meat, milk, cheese and eggs were all rationed, as well of course as items containing these items. Foods normally brought from abroad were just unobtainable. Here is the ration book of the MacLure family of Gowrie Street/Queen Street. They were registered with Beatt and Tait. 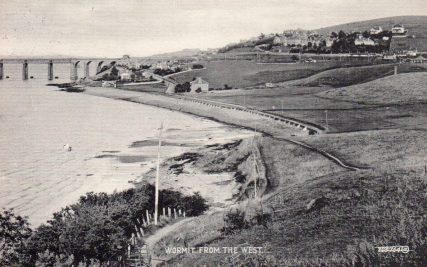 As much food as possible had to be produced at home and so the country was encouraged to “Dig for Victory”. For this reason more allotments were provided on the land between Albert Crescent and Youngsdale Place at the expense of the putting green which was located there. The Wormit Bay Golf Club which had been in existence since 1912, found its land returned to the local farmers to plough up to help with food production. Despite the food shortages during the war people generally ate more healthily when food was rationed: by the end of the war the nation was healthier than it had ever been.

All sorts of goods had to be salvaged. Paper and wool could be re-used, bones could provide cordite for gun cartridges, and aluminium and other metals could be melted down to be used for tanks or aeroplanes. The Make Do and Mend campaign encouraged people not to waste anything. Woollen jumpers could be ripped out and re-knitted, or large garments could be made into smaller ones. Many a wartime bride’s wedding dress was made from a length of souvenir parachute silk. Almost nothing was wasted or discarded. The Boy Scouts and Newport and Wormit school pupils all helped with the salvage collections. 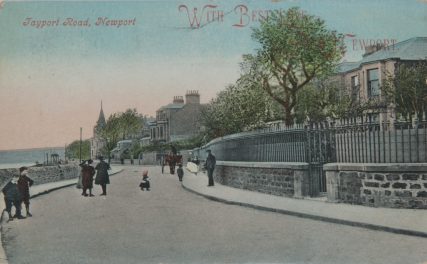 Perhaps one of the most obvious examples of salvage collection was the removal of railings from houses and public buildings. The scrap metal would be used for munitions or even Spitfires. The first request for railings came from the government in 1940. Despite the town council’s reluctance, they eventually had to agree, and work on removal started in March 1943. The many iron-stubbed walls around the village testify to the fact that Newport gave more than average. There is considerable doubt over just how much of the metal collected in this way was in fact ever used for its intended purpose. 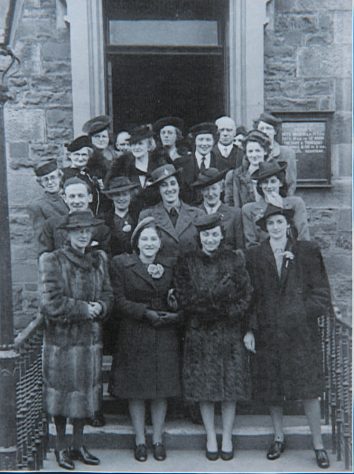 Life did go on however, and our photograph shows a happy wedding group at the rear of the Blyth Hall. This photograph was donated by Land Girl Marguerite Fairweather in the centre of the picture. Only the uniforms tell us it’s wartime.

At the end of the war, like all other towns and villages, Newport and Wormit celebrated peace. Our final photograph shows a children’s fancy dress parade down the High Street. The lack of male onlookers would suggest that many are still away in the forces. 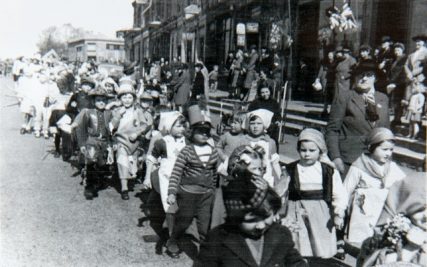