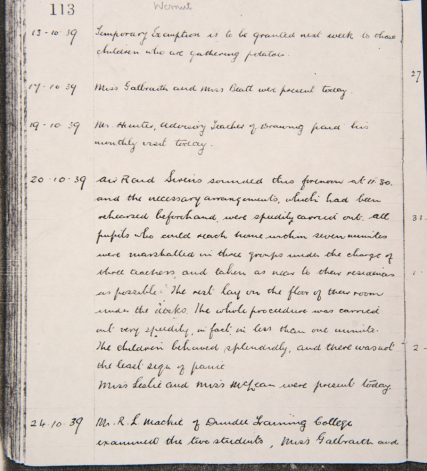 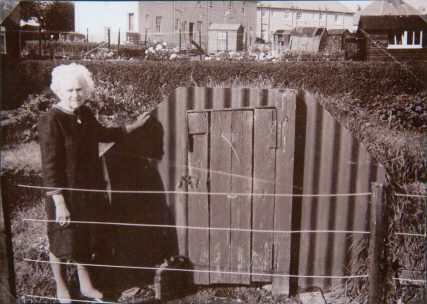 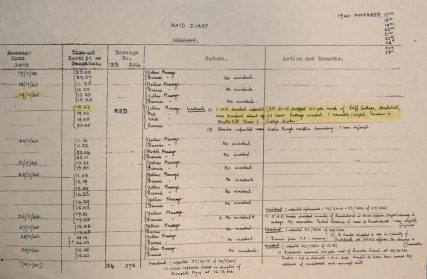 The villages had to be prepared for air raids at all times. An Air Raid Precautions headquarters was set up in King Street, and black-out regulations were strictly followed. No lights were permitted anywhere. In fact the black-out was so absolute that on one occasion the Fifie ran onto the beach at the bottom of Robert Street. A rogue light showing in Robert Street had confused the ferry captain, making him think it was the permitted guiding light on the pier. Air Raid sirens were fitted on the Blyth Hall and Wormit School, and four public shelters were built – at Gas Lane, in King Street, in the garden of Broadhaugh, West Road and in Wormit at Fife House.

In addition shelters were built against the back wall of Newport School playground, and in the playing field at Wormit School. Early in the war, before the shelters were built, schools had to make other arrangements. We have here a page from Wormit School logbook, describing how the teachers and pupils responded to the air raid siren in October 1939. Those pupils who could reach home quickly did so, while the remainder lay on the floor under their desks!

Families also had their own shelters. In 1941 a supply of Anderson shelters arrived in the village. For those with a garden the corrugated iron and curved roofed Anderson shelters were dug into the ground. For years after the war they were invaluable as garden sheds, especially on allotment sites.

Perhaps the greatest fear was that of gas attacks, and the village’s consignment of gas masks had arrived at the time of the Munich crisis in 1938. Everyone was supposed to carry their gas mask everywhere, neatly fitted in its brown cardboard box. Air raid wardens were equipped with football rattles, to be used only to warn of the presence of poison gas. Regular gas mask practices were held, especially in schools and work places. Some ex-pupils can still recall chanting their times tables through their gas masks, sitting in the air raid shelter in the school playground.

In fact the only bomb which fell on or near the village during the war landed in November 1940 near Washer Willy’s cottage on the Inverdovat road. It’s understood that a lone German plane returning from a raid on Dundee or Aberdeen saw a light and dropped perhaps its last bomb. Apparently the light was from a lantern used by someone visiting the outside toilet. The cottage suffered considerable damage and the windows in nearby Chesterhill House and Lodge were broken. The toilet user was only slightly injured.