You are here: HomenextWar!nextWorld War I: Peter Black 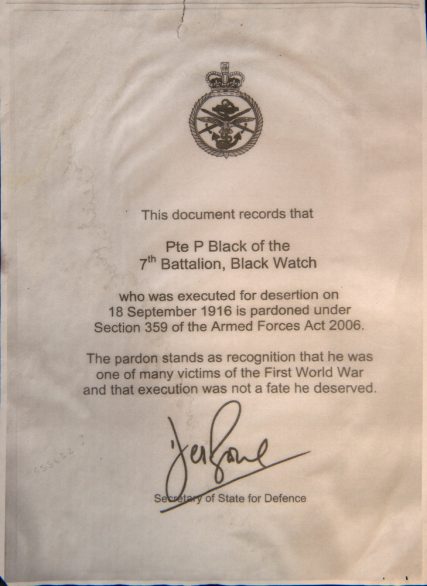 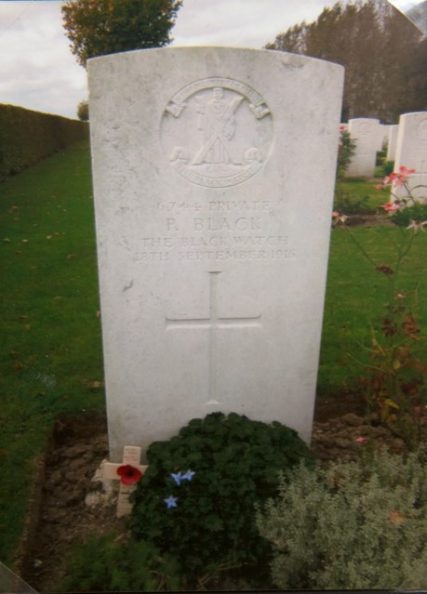 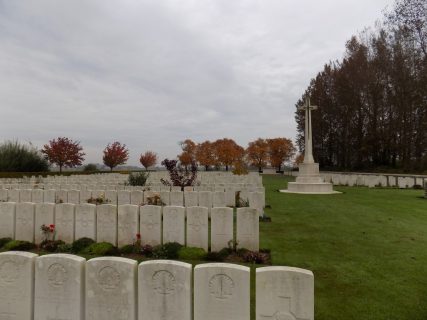 There are 84 names on the Newport War Memorial, 84 young men from Newport, Wormit and Forgan who did not return from World War I. There are many names you will recognise as belonging to families still in Newport more than a century later. Look for the name of Peter Black, the young man whose name almost didn’t appear.

Peter joined the army as soon as World War I broke out and, like so many others from this area, served in the Black Watch. During fierce fighting in 1915, he suffered from shell shock and was severely disturbed. He then experienced further fierce fighting in the Somme area in 1916, and at that point his nerve finally cracked and he deserted. Sadly, in the armies of World War I, there was no place for deserters, and as punishment and as an example to others, like 305 others, Peter was shot by firing squad in September 1916.

When the authorities were arranging the erection of the war memorial in Newport, local people, including many young men who had fought with Peter, were outraged to learn that as a deserter, his name would be excluded. Explosives were stolen from a local quarry and hidden in a house in Robert Street (now No. 13) and threats to blow up the memorial were made unless Peter’s name was included. His name was added, and the explosives found their way back to the quarry.

Although the Newport lads had staunchly defended Peter’s memory, this was not always the case, and deserters’ families were very often made to feel ashamed. 306 British Army and Commonwealth soldiers were shot as deserters in WW1, and for 90 years the stigma of desertion was attached to their names. In 2006 it was at last announced by the Government that all 306 of the First World War soldiers who were shot for cowardice or desertion would be granted a posthumous pardon (see certificate of Peter’s pardon on the right).

For many years, I visited the battlefields and cemeteries of World War I in Belgium and France with pupils from Bell Baxter High School in Cupar, on their annual study visit. It was a very special moment for me when we were able to track down and visit Peter’s grave in Les Trois Arbres cemetery in northern France. I have visited on many occasions since, always leaving a poppy cross and remembering that young man and the miserable end to his young life, but never seeing any indication of any other visitors. Peter’s mother had died when he was a boy. I wonder if his father was ever able to visit his son’s grave? Somehow I think probably not.