You are here: HomenextWar!nextPre-World War I: Vulcan and the Subs

Pre-World War I: Vulcan and the Subs 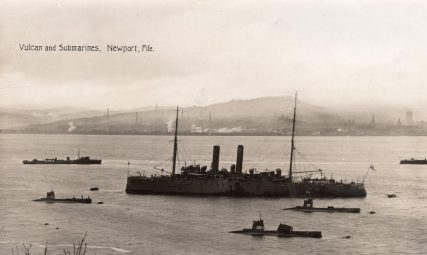 zoom
HMS Vulcan and her Flotilla of Submarines

As naval tension with Germany increased in the years before World War I, in 1909 the Admiralty took out a 5-year lease of part of Dundee harbour as a shore base for a North Sea submarine flotilla. Dundee was chosen because of its graving dock, shore facilities and the fact that the River Tay was a tricky one for enemy craft to navigate.

Newport afforded a good anchorage for the submarines and for HMS Vulcan, the repair ship attached to the flotilla. Vulcan, nine submarines and two torpedo destroyers were based here. Vulcan was moored in the river just off Newport, so there was much activity to be seen from the village.

By the time the lease had run out, World War I had started, and the building of the Rosyth Naval Base on the Forth resulted in the submarines moving there.